Rain on the Map, But Not Outside?

Radar sometimes detects things that aren’t rain. Bats, birds, and bugs sometimes fly in such numbers that modern radar systems detect the reflections from these creatures. Non-biological things, such as wind turbines in wind farms, also sometimes cause radar to register returned signals.

The following steps can help you determine whether the signal you see is really rain in RainViewer on Android or iOS (and iPadOS) devices. 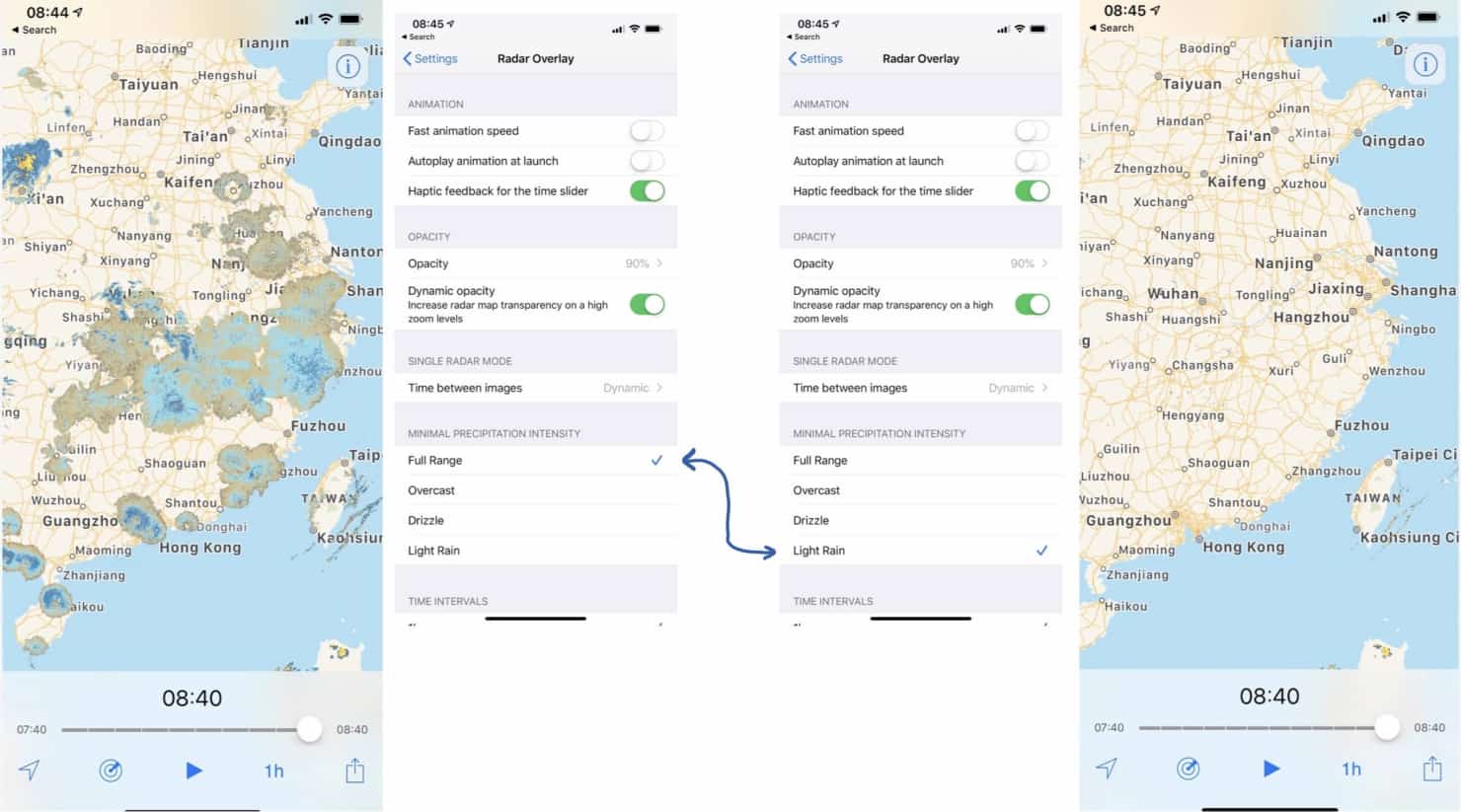 1. How solid is the pattern?

By default, RainViewer displays a “Full Range” of precipitation. When radar detects biological creatures (i.e., bats, birds, or bugs), the signal and density tends to be relatively weak and/or diffuse, especially when compared to strong storms systems.

In RainViewer, tap the ‘i’ with a circle around it (or, on Android, the three vertical dots, then Settings) to access settings, then, under Radar Overlay, tap More… and change the Minimal Precipitation Intensity setting to Light Rain. This filters weaker reflected radar signals, and displays only areas of greater intensity. It also tends to filter out most signals from flying creatures. (You might experiment with the other intensity settings, such as Overcast or Drizzle.) 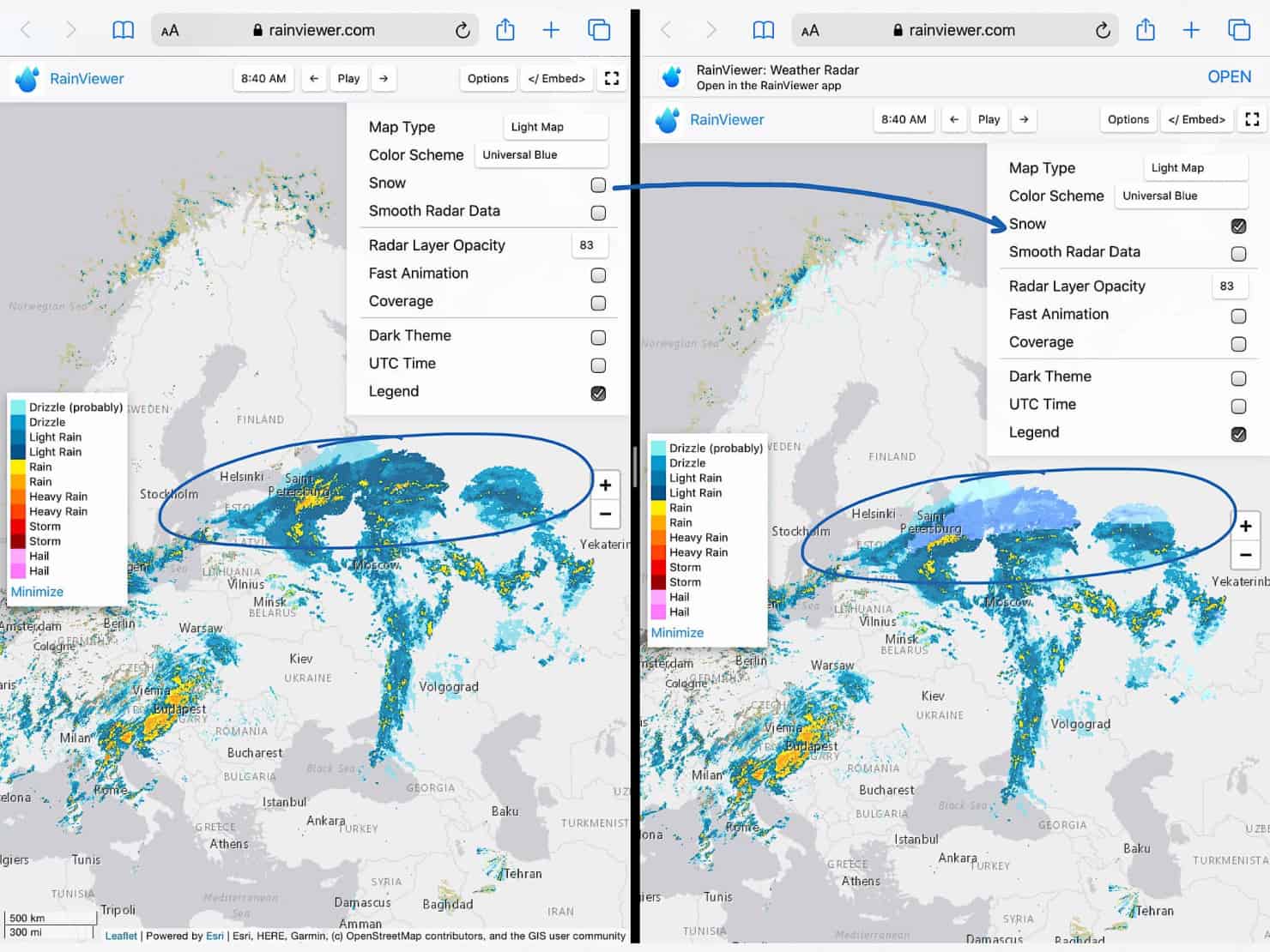 Rain, freezing rain, and snow are all variants of falling precipitation. Different conditions can create each, although these may look similar on a display.

In RainViewer on the web, choose Options, the. Select snow. In the mobile apps, access settings, then tap the slider next to Snow on (slide it to the right). This changes how RainViewer displays some detected signals. Since RainViewer has so many different displays, the specific color will vary, but the Snow setting changes the color of precipitation that is likely snow. When enabled, suspected snow will display differently than rain. 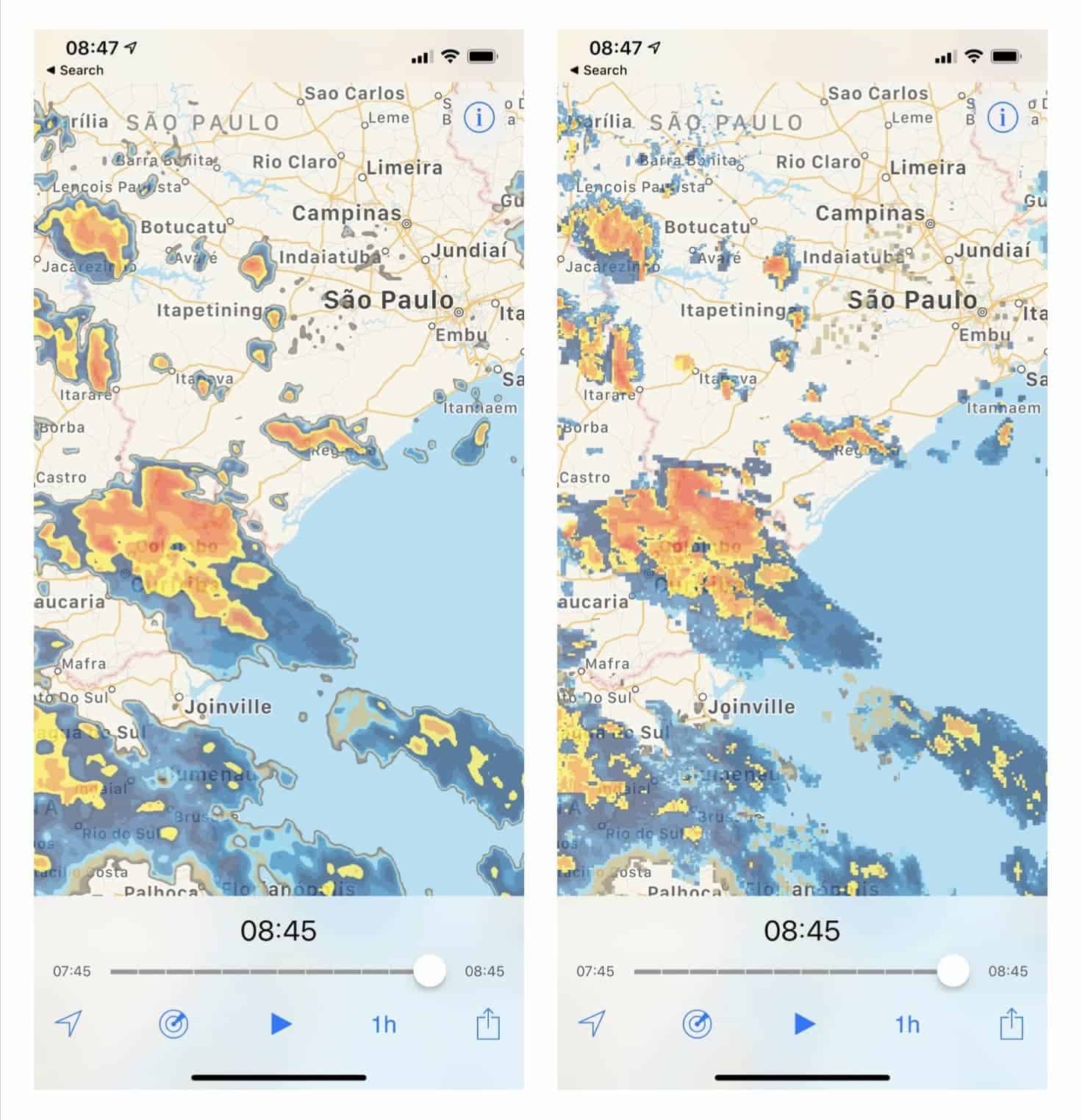 3. Is it really raining there?

Radar systems scan the sky every few minutes. In clear conditions, many radar systems take as much as ten minutes to complete a scan. When storms are present or possible, systems tend to be set to scan differently in order to track storm movement more accurately. Even in this case, though, the gap between scans can be five or six minutes.

When RainViewer displays these different images taken over time, it attempts to “smooth” these images. This smoothing makes the overall movement of a storm system easier to track visually. However, smoothing also may make it appear to be raining or snowing in areas where it is not.

For a display that most accurately shows radar results, turn off smoothing. In settings, move the slider next to “Smooth Radar” to off (slide it to the left). Your RainViewer may look a bit blockier, but the data displayed will now more closely match actual radar results. 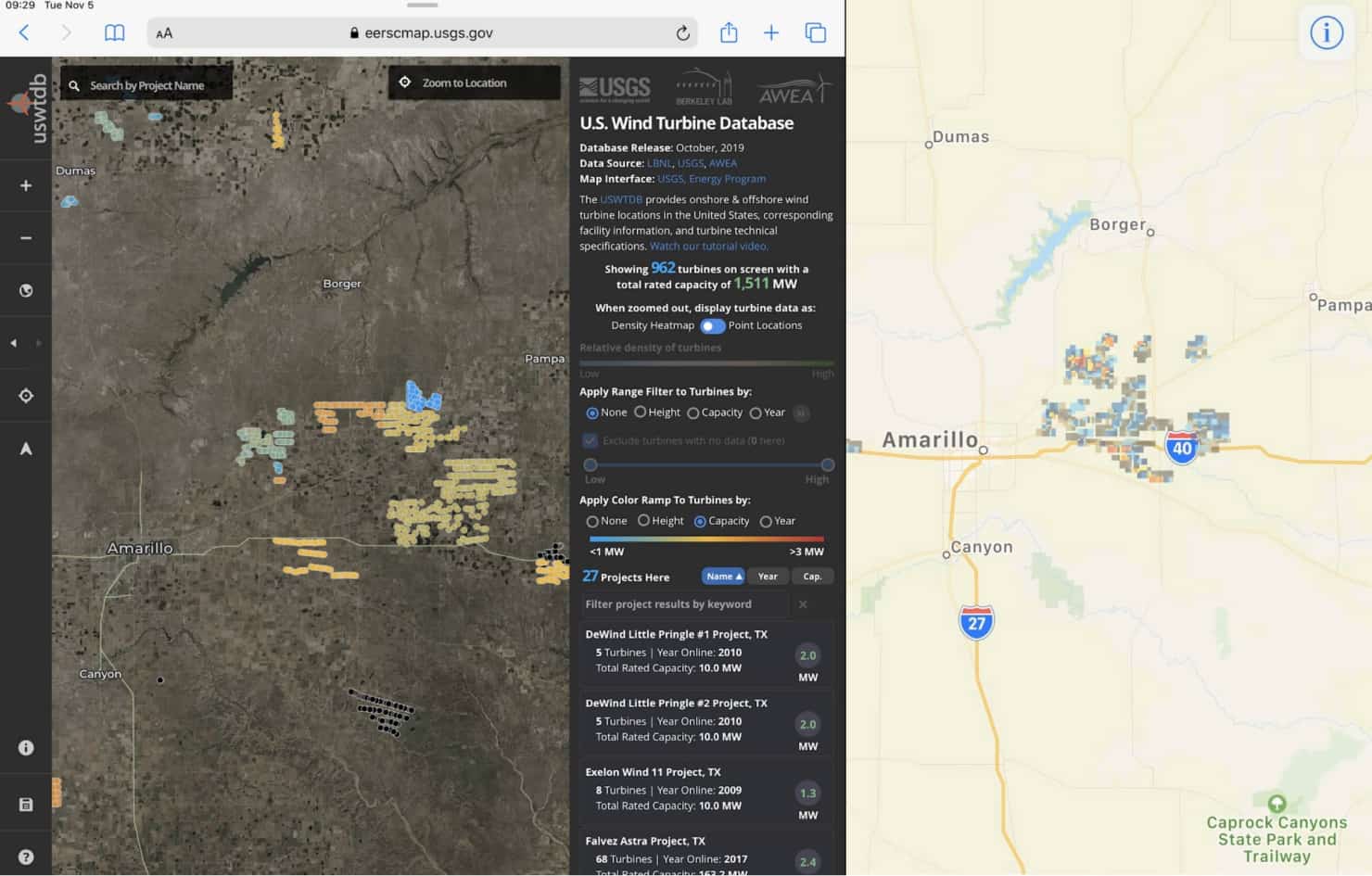 4. Does the pattern move?

In some areas of the world, wind farms may cause radar systems to record signals that you might interpret as rain. However, while most rain (or snow) systems move, wind farms don’t move.

You can look at a radar signal in RainViewer over a longer period of time to figure out if the system might be a wind farm, instead of rain. Tap the box with a number in it to increase the time that RainViewer displays from 1 hour of data, to 2 or 3 hours. (If you’ve paid to upgrade, the premium version allows access to radar for an even longer time period.) Watch the displayed radar image over time. Depending on conditions, wind farms may seem to appear or disappear to radar, but they won’t move. If signals seems to flash on and off, that’s a good indication you may have found a wind farm.

If you like, you might explore online wind farm maps. In the United States, visit the Wind Turbine Database, then launch the USWTDB Viewer. Elsewhere in the world, visit The Wind Power, select a region tab (e.g., North America, South America, Asia, Europe, or Oceania), then select the online map next to a country. In either case, you may then zoom into a specific area to display known wind farms.

For example, RainViewer displays some signals in an area east of Amarillo, Texas (U.S.) as returning radar signals. If you visit the area, you’ll see that it isn’t an area of constant rain, but instead home to several of the largest wind farms in the area. 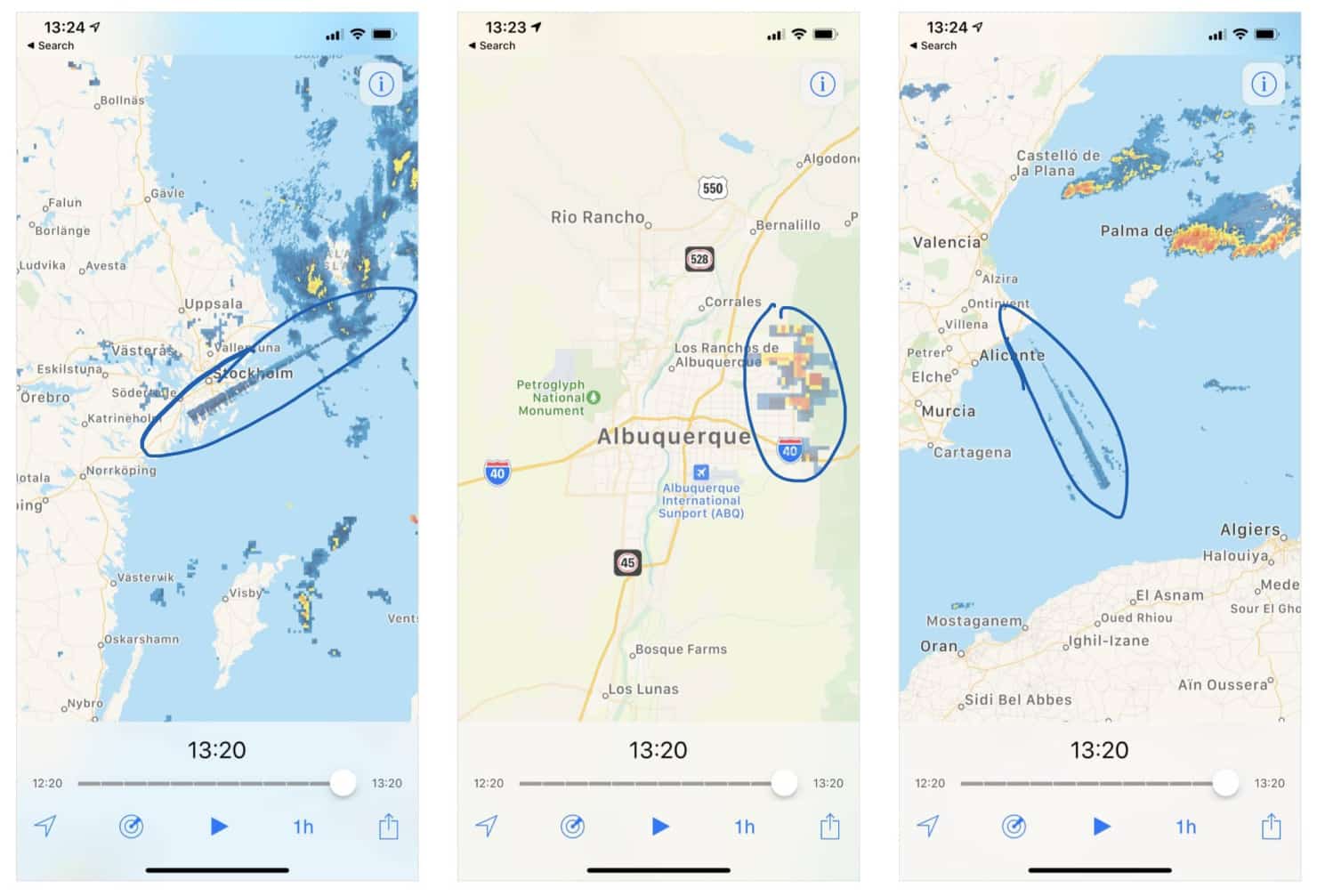 Sometimes radar displays signals that not only don’t move, but also aren’t rain. These signals are the result of specific interactions between land, objects, and radar equipment. Different radar systems filter signals differently. This noise can appear as rays from the image center to its ends (Spanish radars), chaotic small “rainfall” areas in the images (US radars) or persistent noise in the same place (Canadian and Romanian radars). It sometimes looks like circular interference when either all or part of the image falls into the “precipitation zone” (common with Thai and Serbian radars). RainViewers’s processing software removes most of this noise, but not all, which is why you will sometimes see these anomalies.

To help identify these weather anomalies, watch how RainViewer displays signals for a region over time. For example, in New Mexico, radar often shows signals that never move just east of Albuquerque. Most often, these signals aren’t rain, but are instead anomalies caused by the terrain, in this case mountains.

A few settings adjustments — along with a bit of additional research — can help you more accurately recognize precipitation when you see it in RainViewer.