The 2021 Atlantic hurricane season was so rich in storm events that the World Meteorological Organization ran out of storm names. In May 2021, NOAA predicted 13 to 20 named storms with 3 to 5 major hurricanes. In total, 21 storms of different categories were raging over the Atlantic Ocean, making 2021 a record-breaking year. More hurricanes took place only in 2005 (27) and in 2020 (30).

It was also the most expensive hurricane season, causing damage worth $67 billion. 8 hurricanes made landfall in 2021, and 3 of them cost the affected countries billions of dollars.

Now let’s find out which storms rocked the continent in 2021.

Let’s start with the most devastating and major hurricanes that hit the United States and neighboring countries in 2021. 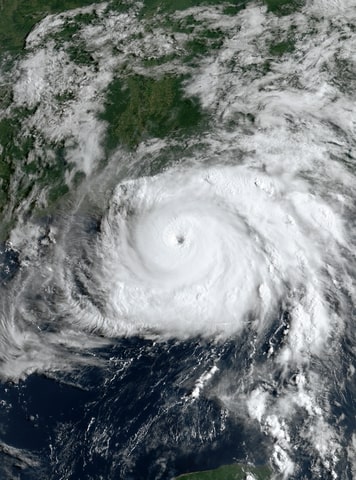 Hurricane Ida is a Category 4 Atlantic cyclone that struck the southeastern United States in August and September 2021. The consequences of the hurricane also spread to the northeast of the country. At least 115 people became victims of this natural disaster. It was the worst hurricane in the 2021 season. 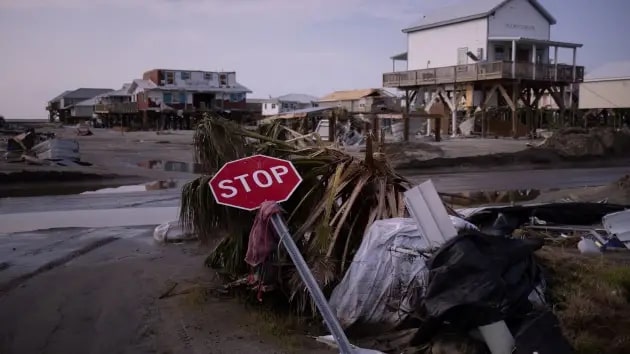 First tracked by the National Hurricane Center on August 23, Ida became a Category 1 hurricane on August 27, 2021. On August 29, the cyclone upgraded to Category 4. Ida’s strongest blow to New Orleans (Louisiana) came at 19:00 local time. Violent wind at a speed of about 155 miles per hour hit the coast of Louisiana, causing floods in coastal areas. However, when Ida came to the continent, it immediately fell to Category 2. The remnants of the hurricane reached the northeast of the country. In particular, severe flooding was noted in New York.

Over 70% of Louisiana was out of power. More than a million homes were left without electricity. The natural disaster caused the Mississippi River to change direction. It killed 115 people, destroyed 1,200 homes, and caused damage worth at least $75 billion, with insured losses of $40 million. 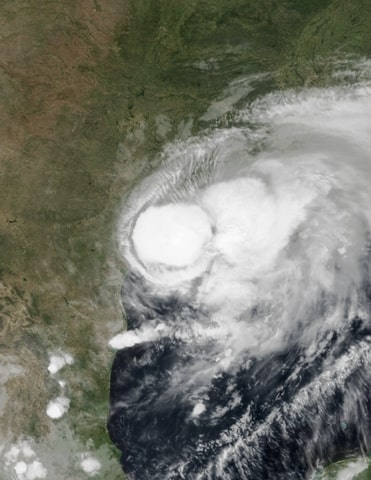 Formed on September 12 in the Gulf of Mexico, just a few weeks after Ida, tropical storm Nicholas intensified to the stage of a Category 1 hurricane on September 13. The storm hit Texas and the southern part of Louisiana. According to the US National Hurricane Center, the maximum wind speeds in its center reached 76 miles per hour. Nicholas moved to the northeast at 10 miles per hour, causing massive power outages. It also brought heavy rains and flooding. Nicholas did not take any lives but it cost the country about $2 billion.

Here’s the map of precipitation caused by Nicholas: 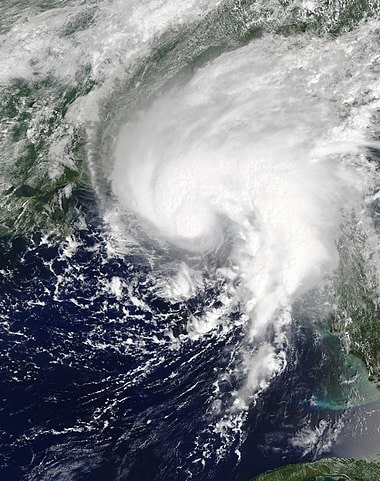 This storm hit the south Dominican Republic and the north shore of Cuba on August 9. Having approached Florida on August 16, the storm moved further north and caused tornadoes in Georgia, North Carolina, South Carolina, and Pennsylvania. It also brought power cuts to about 75,000 homes along its way and inflicted $1.3 billion in financial damage. 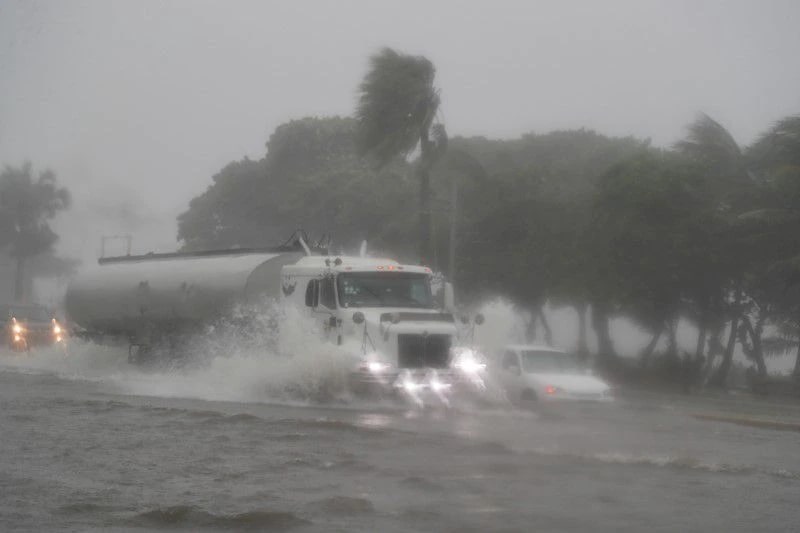 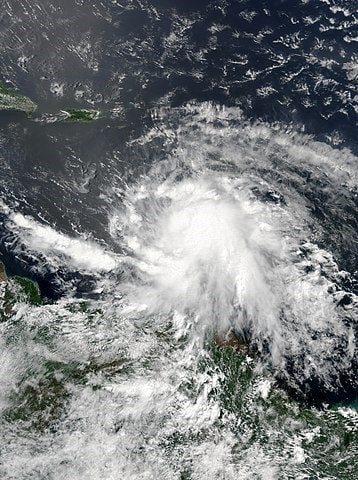 Elsa is the first hurricane of the 2021 Atlantic hurricane season and the earliest fifth named storm. Having started on July 1 as a tropical storm, Elsa upgraded to a hurricane on July 3 and brought hurricane conditions to St. Lucia, St. Vincent, and other islands. However, on the same day, having moved over the Caribbean Sea, it lost its strength and turned into a tropical storm again. On July 5, Hurricane Elsa landed in Cuba where 180,000 people had been evacuated. On July 6, it approached Florida, creating tropical storm conditions in Florida Keys, moving further along the Gulf Coast, and landing in northern Florida the next day. Then the storm’s path included Georgia and Atlantic Seaboard before it finally dissipated over the North Atlantic. Elsa was responsible for 13 deaths. 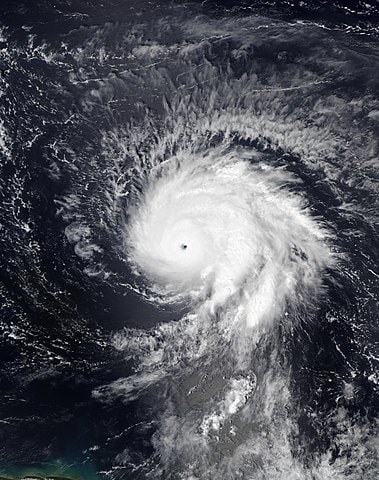 This storm was a result of a tropical wave from the west coast of Africa. It was the fourth major hurricane and the 18th named storm. Moreover, it was the fifth long-lasting hurricane in the season, as it occurred between late September and early October.

Being originally a tropical depression, Sam transitioned into a hurricane on September 24 and got Category 4 on September 25. It showed a wind speed of 145 miles per hour, 550 miles southeast of Bermuda. Sam was moving northwest at a speed of 16 miles per hour. At its peak, the storm made landfall in eastern Cuba. Sam caused heavy rainfall in Puerto Rico but there were neither damages nor deaths.

Here’s how Sam’s path looked in the RainViewer app: 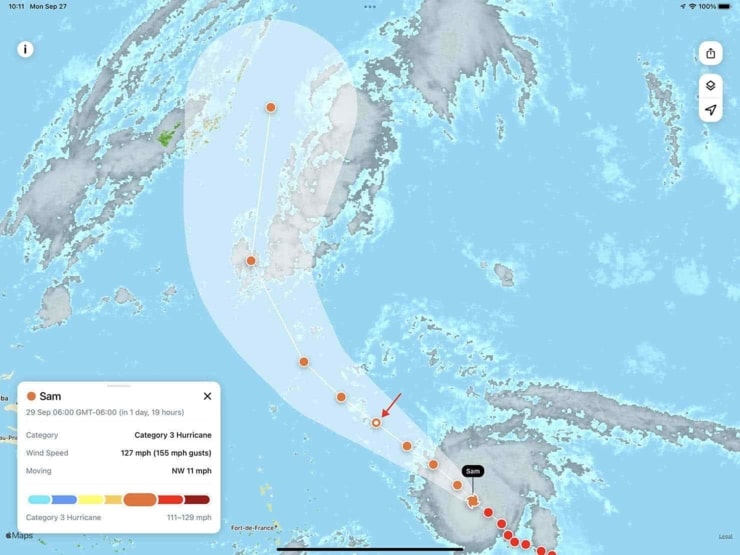 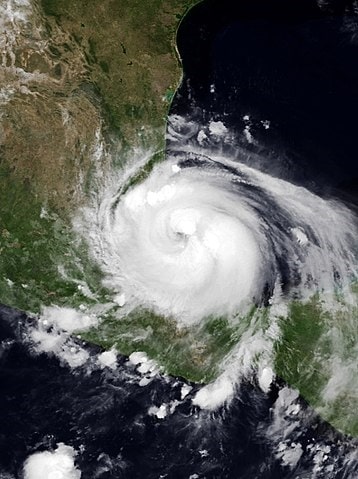 Hurricane Grace first emerged as a tropical storm over Haiti. Then it returned to the Caribbean Sea, became a hurricane, and made landfall in the Yucatan Peninsula in southeastern Mexico on August 19. As a result, about 150,000 people were left without electricity. The power blackout also interrupted the water supply. Cancun International Airport canceled several flights. On Saturday, August 21, the NHC reported that the hurricane strength grew to a Category 3 near Mexico. Grace took the lives of 8 people. 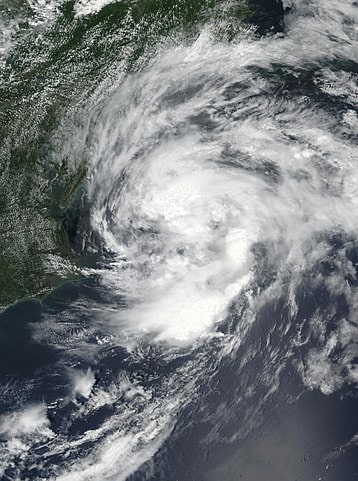 Having started in Louisiana as a tropical depression on June 19, Claudette upgraded to a tropical storm in New Orleans, inflicting the most damage in the east of the city. The storm led to flooding and tornadoes in Florida and Alabama. The number of fatal victims was 13, the same as with Elsa. 10 among them were children. 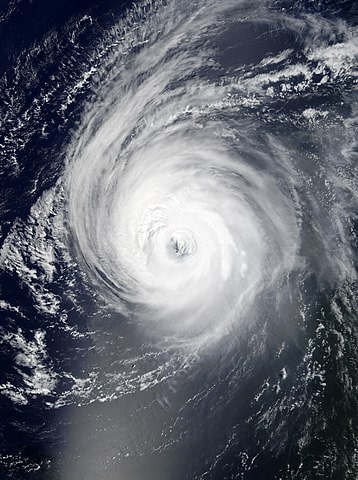 Having hit the province of Newfoundland in Canada on September 10 as a Category 1 hurricane, Larry caused widespread power outages in 60,000 homes. It also provoked tree damage but luckily took away no lives. Larry’s remnants moved further north, causing heavy snowfall on the coast of Greenland.

The 2021 Atlantic hurricane season also included 13 storms classified as minor. Among them are:

As a result of this weather event, most of the houses and apartments – nearly 70,000 - remained without electricity in the state of Rhode Island. This state was the first in the path of a tropical storm. In the neighboring state of Connecticut, 27.4 thousand homes remained out of power.

Mindy formed off the coast of Florida on September 8, affecting the southeast of the United States and most part of Mexico. Like Sam, it originated from a tropical wave from the west coast of Africa. On September 9, it made landfall on St. Vincent Island. During the movement across Mexico, the tropical storm caused massive flooding, incurring losses of $75 million and taking away 23 lives. On September 10, Mindy turned into a post tropical cyclone.

Unlike most storms of the Atlantic hurricane season 2021, tropical storm Odette took place in December although the season lasts until November 30. Odette formed on December 3 as a tropical depression near Jamaica. Odette made landfall in the Dominican Republic, caused floods and mudslides, killed 8 people, and injured 14 people.

This storm hit the US East Coast at the beginning of November 2021. It caused major floods in areas that were previously struck by Ida and Henri. In Massachusetts, Wanda left about 500,000 homes without electricity.

Now let’s summarize the official Atlantic hurricane season and highlight the key facts about it.

If you live close to the affected areas, we urge you to take the weather alerts seriously so you have enough time to get to the nearest shelter. The RainViewer app will help you to stay aware of upcoming severe weather with push notifications and the storm tracking map. You will get timely alerts just after the formation of a tropical storm and remain up to date with its path and category changes. Stay safe!