How to Spot a Tornado on Radar

A tornado is an extremely dangerous natural phenomenon that causes destruction, injury, and often death. Most tornadoes occur in the United States, with the tornado season lasting from March to July. According to the National Weather Service, about 80 people die because of tornadoes each year in the US. The most dangerous region concerning tornadoes is called Tornado Alley and includes several states, specifically, Texas, Oklahoma, Kansas, and Nebraska.

Let’s take a look at the most damaging tornado events in US history:

Now guess what these catastrophic weather events have in common? That’s right – they happened quite a long time ago. At those times, there was no equipment that could predict a tornado coming, issue tornado warnings, and thus save human lives.

How to Find Tornadoes on Radar? First Investigations

The first attempts to predict the tornado, whirlwind, and cyclone events started as early as in 1882. John P. Finley, the U.S. Army Signal Corps Sergeant, was responsible for that. After 2 years, in 1884, he developed the 15 rules for tornado forecasting and published them in 1888. Among those tornado warning signs were:

Unfortunately, Finley’s research encountered obstacles. The U.S. Army Signal Corps banned the word “tornado” from official forecasts in order not to cause panic among the population. However, after the Tri-State Tornado in 1925, Finley’s rules were brought back to life, helping the scientists to recognize the possibility of a tornado. Still, these warning signs were not enough to forecast a tornado in advance. The word “tornado” remained banned until 1942, when the central United States suffered a great number of tornado strikes. Already in 1944, advanced forecasts included tornadoes, but still, they could not predict the exact place or time of the storm.

The first use of radars as weather prediction equipment took place in 1950 with the introduction of the Tornado Project. The Weather Bureau and air force bases in Kansas, Nebraska, and Oklahoma provided radar coverage for this project. Analysis of data from radiosondes became a primary method for tornado forecasting.

On April 9, 1953, a radar “caught” the first tornado ever. This historical event happened in Champaign, Illinois. Don Staggs, the radar technician, saw a “hook echo” and recorded it with a 35-mm camera. Exactly hook echoes indicate the high probability of tornado formation. Here’s what this tornado looked like on the radar: 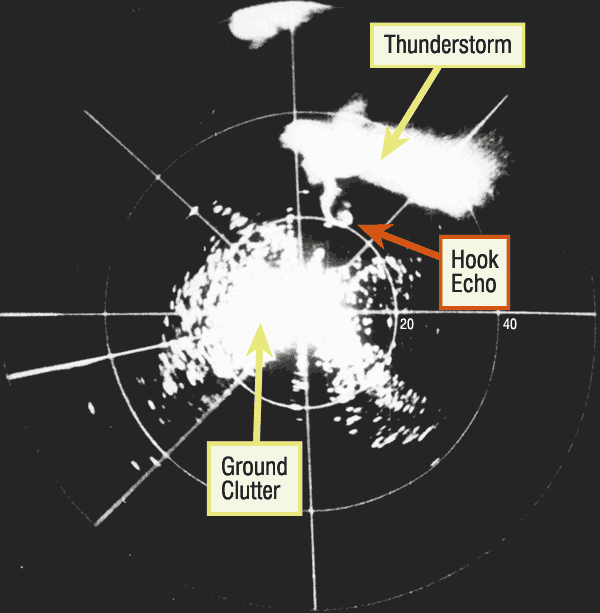 Modern radars, such as the dual-pol radar, can deliver quality, colorful, and high-resolution images of tornadoes. They can even define the wind speed and the size of objects in the atmosphere. As a result, scientists can research these dangerous events in real time, analyze their strength, direction, and speed, define the level of threat, and issue a short-term tornado warning. Modern technologies also allow people who are not weather experts to track tornadoes on radar maps with the help of specialized apps, such as RainViewer.

What color is a tornado on the radar?

Most sources that publish radar images or videos of tornado events use the two main colors, red and green. Red indicates the winds moving away from the radar whereas green displays the winds moving toward the radar. Brighter shades identify faster winds whereas darker shades show slower winds. Such maps typically indicate a tornado by a smaller area of red surrounded by a larger area of green. 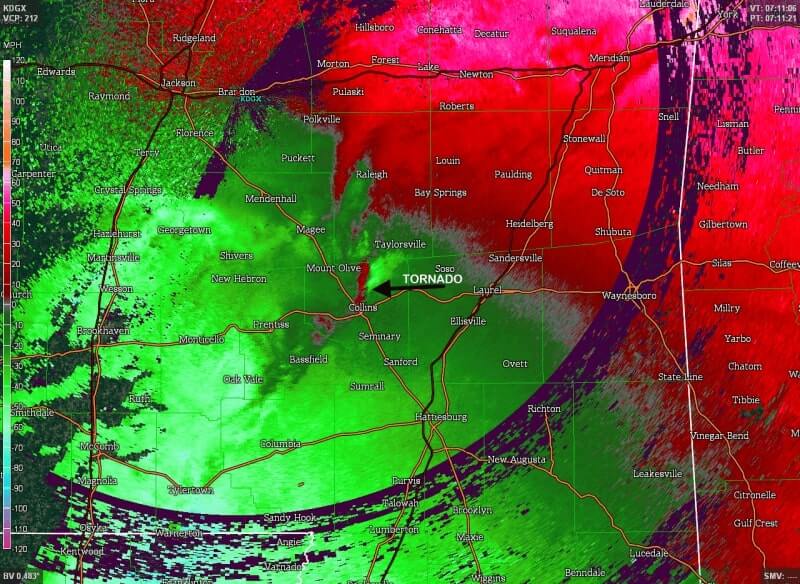 What Does Radar Confirmed Tornado Mean?

To confirm a tornado, meteo experts need to spot the following key features on the Doppler radar: 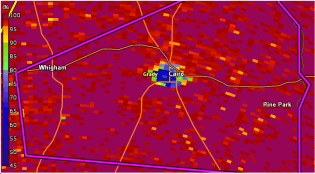 When these two factors - debris falling and rotation - occur at the same time, they create the so-called Tornadic Debris Signature (TDS), helping meteorologists to define a radar-indicated tornado.

How to Track Tornadoes on a Radar Map?

So here’s how you can spot an impending tornado on a radar map:

Tornadoes cause heavy rain, flooding, power outages, and property damage. They injure people and take away their lives. Therefore, it is important to be informed about these natural phenomena in real time or at least in a short term. The RainViewer app features built-in severe weather alerts that deliver urgent information about extreme weather directly to your smartphone. Moreover, it sends notifications about the formation of hurricanes and storms as well as shows their tracks on the radar map. As a result, you can take proper precautions. Do not ignore the tornado warning signs and stay safe!